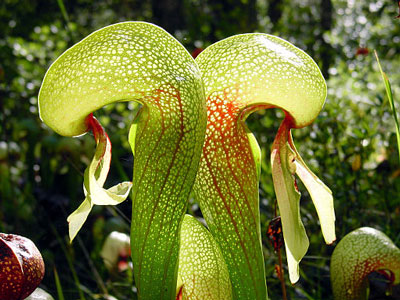 Darlingtonia California is also known as California pitcher plant, cobra plant or cobra lily California is a genus of animal eating plant, the only member of the genre Darlingtonia from the family of the Sarraceniaceae. It inhabits Northern California and Oregon, grows in marshes, and seeps with cold running water. This plant has an unusual classification as due its natural rarity; it derives its name from the inimitable shape of its many stalks, resembling cobra heads rearing to strike

California Pitcher Plant or the cobra lily settlements truly flourish in ultramafic soils containing an ample abundance of dark, ferromagnesian minerals. The cobra lily’s natural design allows it to enhance its requirements of nitrogen through carnivory, which goes to compensate for deficient nitrogen.


How the traps work


Our articles are free for you to copy and distribute. Make sure to give www.learnaboutnature.com credit for the article.