Catopsis- A Yet Unconfirmed Carnivorous Plant 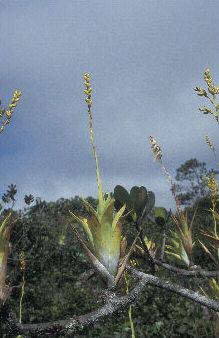 The species Catopsis is belongs to the family Bromeliaceae and the  Tillandsioideaev subfamily. The name derives from “kata” the Greek word for “hanging down” combined with “opsis” or “appearance”. You can find varieties of Catopsis from Florida, running parts of Brazil in the East, as well as the Caribbean.

However, there are many species, but you can consider only Catopsis berteroniana as a possible carnivorous plant, though it is yet unconfirmed. The plant grows over a large range from south Florida all through México (Campeche, Chiapas, Guerrero, Oaxaca, Quintana Roo, Tabasco estados and Veracruz), the Islands of the Caribbean and Central America, Brazil and VenezuelaThere are nearly twenty known varieties of Catopsis. Though they almost look-alike, the varieties found in hot and dry areas are comparatively smaller than those found in cooler and more humid areas are.

Cultivation conforms to that of Brocchinia. Catopsis grows in exceptionally bright conditions, needs protection from frost, but requires an ample abundance of humidity. You can carry out the process of watering simply by pouring disinfected water straight into the urn. You may feed it by occasionally throwing into a bug in the urn or leaf axils.

You can propagate catopsis through pup as the plant dies after flowering. It seems, as the plant dies, it leaves behind only one replacement pup, which you may use for maintaining your plants rather than propagating the same. Apparently, the plant is largely dioecious so, consider yourself lucky if you get plants of both genders to cross them. Yet, some horticulturists reportedly got hold of seed readily from their plants, so it is uncertain if the plants are dioecious. It could be a trait restricted to some varieties. Apparently, the feathery seeds dispersed by wind germinate quickly.