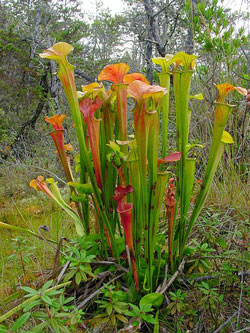 The North American Pitcher plant or Sarracenia is a type of carnivorous plant that habits the great lakes, the eastern seaboard, Texas and southeastern Canada, most of its varieties growing in the southeast states.

The leaves of the North American Pitcher plant have developed to have a funnel like shape with a hood like formation growing above the opening that stops rainwater from weakening the digestive juices.

The lowest part of the tube, containing a pool of liquid consisting of digestive enzymes and wetting agents swiftly drowns the victim and starts digestion. The largely undigested exoskeletons fill up the pitcher tube while summer lasts.

Pitcher making starts at the end of the flowering period in spring and ends in late autumn. As autumn draws nearer, the pitchers start withering and the plants create non-carnivorous leaves named phyllodia, which play a part in the economics of carnivory in this variety by assuming a slower metabolism all through winter when the prey is infrequent.

Most of these species confine themselves to the United States’ southeastern coastal plain. Most of the North American pitcher plant species grow in the southeastern coastal plain of the United States, but some of them extend northwards and westwards into Canada. They require a habitat with a warm temperature and since they are perennial, the Sarracenia needs a clear demarcation of summer and winter. Swamps, grassy plains and wet fens, with low pH acidic soil, a blend of sphagnum moss and soil, are their permanent habitat

Many enthusiasts of carnivorous plants have taken up growing the North American Pitcher plant, because its cultivation is easy and uncomplicated. Please read below some tips for a successful effort.

A true enthusiast can enjoy raising Sarracenia by sinking wading pools, laundry tubs or plastic pots in the ground, but make sure you provide a slit at the bottom to prevent water from stagnating in the soil

Mix one part of sand and two parts of sphagnum peat moss and you have the ideal substrate for the Sarracenia. However, since these plants prefer acidic, moisture retentive and nutrient poor soil, you would do well to avoid clay and rich soils.

When you decide to cultivate the Sarracenia, make sure to choose a location that provides at least more than five hours of direct sunlight. Remember that these plants do not flourish under artificial lights.

The North American Pitcher plants are very finicky to water quality. Use only rainwater, or pure water from a reverse osmosis process.


Our articles are free for you to copy and distribute. Make sure to give www.learnaboutnature.com credit for the article.