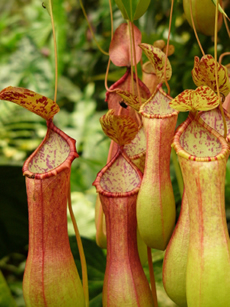 Perhaps the Pitcher plant is the most mysterious leaf in the whole wide universe. With its unique ability to obtain food, it has inspired multitudes to reshape their concept on how nature really works.

Contradictory to what we always think, the pitcher plant does not really look like the one we have on the fridge. Rather, most of them resemble goblets of all shapes and sizes!

The pitchers under the Old World clan live high above a tree. Because there is not much of a food source up there, the plant resorts to find an alternative source of nutrients. What it does is to fold the ends of its leaves like a cup and concocts nectar juices and waits daintily for its helpless victims.

Meanwhile, the New World family members enjoy the attention of many more insects while staying on ground. Unlike its relative who lives up in the trees, these pitchers actually form a whole pitcher out of its leaf. 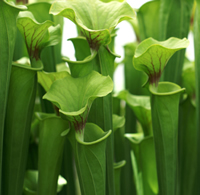 Nothing excites more awe and suspense than seeing a Pitcher Plant with your own eyes. With its deeply folded leaves, the cup-shaped plant stores up a sweet-smelling juice which lures an unsuspecting insect into its mouth. And when it is about to sip…an unfortunate thing happens.

Unable to climb back, this fallen insect flails helplessly in the fluid until it loses energy and submits to the overpowering force of its fate.

So what happens to the ill-fated insect?

Much like the animals, the pitcher plant “eats” the poor thing up. How does this seemingly harmless plant do such thing?

The secret lies in the juice. This liquid is no ordinary nectar. It actually contains chemicals (that are similar to those found in the stomach) that could slowly munch and swallow the skin of its prey until it dissolves completely—becoming the very juice that it once tried to drink.

Such is an event is an everyday happening for these pretty pitcher plants.  Did you know that the larger pitchers could even trap small frog, snakes and birds inside? But even though they are deadly traps for mosquitoes, please don’t believe in science fiction flicks where they could gulp down a person!


How did the pitcher plant become meat-eating?

But did you know that it actually took millions of years before simple, harmless leaves became carnivorous? Yes, it is the mysterious and wonderful product of natural selection! It means that nature itself has favored the growth of leaves with larger dents until it became what we know today.

The plant “evolved” because it has found that eating small insects could give it the necessary Proteins, Nitrogen and other minerals that it couldn’t just seep from the soil. 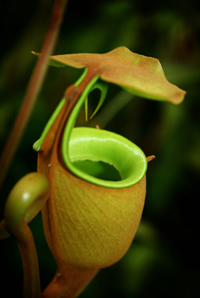 Did you know that pitcher plants could also live in not-so-liveable marshes and peat bogs? They are called marsh or Heliamphora pitchers and they live inside the secluded forests of Latin America.

On the other hand, the trumpet pitchers have lids on top of their cup-like structures called an operculum. It acts like an umbrella to shield the pitcher from choking with too much rain! Another interesting species to look at is the Darlingtonia californica which really looks like a snake about to strike.

Did you know that these plants are so alluring and beautiful that was even made as the official flower in a Canadian country? Yes, it’s true! In fact, the New Foundland and Labrador province in Canada has the Purple pitcher plant Sarracenia purpurea as its one and only floral emblem. Can you believe that?

On a report, the scientists in Brunei have finally discovered why one pitcher beauty, the Nepenthes rajah is one of the biggest in the world! Though its mouth could very well swallow a whole shrew, the researchers were confused that throughout the years of their study, they were not able to not even a single dead individual inside.

Suddenly, the answer finally showed itself one day. Upon examining the inside contents of the N. rajah, they discovered a freshly delivered fecal matter and soon found out that its owner is the resident tree shrew who lives nearby.

Further tests have led them to conclude that indeed these little primate relatives make toilet bowls out of the pitcher plant!

If we think that their relationship is strange enough, hear this: it seems that the tree shrew was not the only that shares this close friendship with the pitchers!

Still, on the forests of Brunei, the biologists have ascertained that bats also use the plant’s “facilities” as its rest room. And, not only that—did you know that these winged mammals can also afford to make it as its dormitory? Yes, the pitcher plant, the ever-generous N. rafflesiana landlady, has even made a girdle on its side to serve as the bat’s bed! How awesome is that?

What made the pitcher plant decide to transform itself into a living commode?

Unlike us humans, the pitcher plants think that this is a very lucky thing! Actually, every waste matter that is excreted by all animals is rich in Nitrogen. We learn in school that Nitrogen is very helpful for all plants in their growth and development. What could excite you more than seeing these wonderful pitchers standing in front of you? With the convenience of modern technology, we would only not see them in pictures—but we could actually bring home one if we want to!

See the nature unravel its wonders within the confines of your own home. Inspire great curiosity and knowledge on your children as they open their eyes to the fact that mother Earth indeed holds wonderful secrets that they have yet to unlock!